We began class on 2/2/16 with learning about the namesake of the primary Grasshopper Tool that our class will be primarily using through the Semester, Alba.

“Alba” is the name of a genetically modified rabbit created by artist Eduardo Kac, with help from French Geneticist Louis-Marie Houdebine in 2000. By using a Green Fluorescent Protein (GFP) ordinarily found in Jellyfish, Alba is able to glow entirely green under Blue Light. 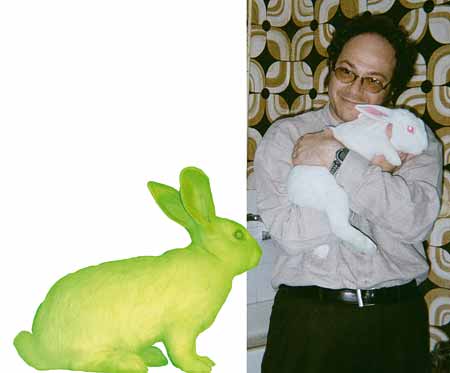 Afterwards, we dove right into leaning Ryan’s Alba Grasshopper Suite. We are using the scripting component of Grasshopper combined with resources from BioBricks to fully understand DNA and the ways we can interact with it in this rapidly developing field.

For example,  we can use several visualizers to show us the base pairs, and amino acids of a particular Promoter.

In the first Alba Grasshopper definition we created, we simply visualized the Amino acids and Base pairs of a Green Fluorescent Protein (E0040) into the Rhino Viewport.

In the third Definition we created, we practiced running Digestion ad Ligation within Alba. We essentially laid out what we were going to do in the lab later after lunch. We visualized the Digestion of the GFP Plasmid with the Pstl and the Xbal Enzymes, and the digestion of the Lacl plasmid with the Pstl and the Spel enzymes. Afterwards, we visualized the ligation of these two plasmids together.

You can see in the Rhino viewport how we selectively cut out certain sub sections of DNA to eventually Ligate together.